Emperors and fakeers, princesses and princes, princes who were to be kings and princes who never became kings, residents and presidents, warriors and warlords, poets and painters – Delhi has always welcomed those who wanted to live here, but more importantly, those who wished to die here.

For a city that has been built and destroyed, raided and pillaged, rebuilt and expanded for over a thousand years, Delhi is dotted with several graves and tombs that continue to serve as reminders from the past about the women and men who made their mark in the city’s history. Some of these burial spots have become places of worship such as the various Dargahs of Delhi, there are others which have now become iconic monuments, tourist hotspots, picnic spots, or just a retreat for those seeking recluse from the everyday life in the capitol. 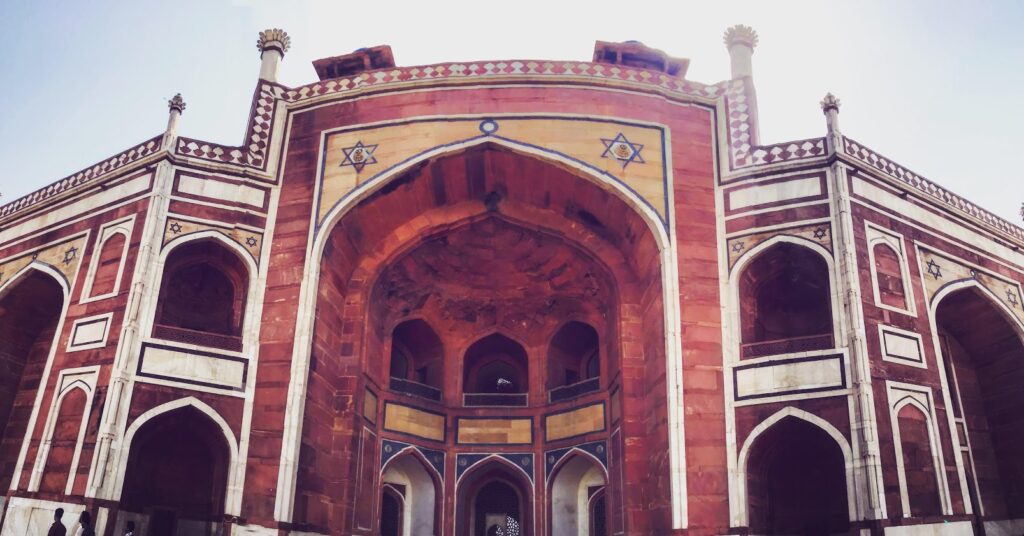 When it came to choosing their grave, Sufi Saints chose to be buried near where they preached while Kings chose to be buried next to these saints, far away from the splendor of their palaces. This is due to the belief in mystical Islam that being buried next to a Sufi Saint guarantees a spot in jannat. This is one of the biggest reasons why there are so many graves next to the Dargah of Hazrat Nizamuddin Auliya. The central and the most important grave here is that of Nizamuddin himself, a Sufi saint who lived and died there in the early 14th century. You’d find several other graves scattered all over the same Dargah complex, with the more important ones being surrounded by marble enclosures.

The enclosure closest to the grave of Nizamuddin is that of the 18th century Mughal Emperor Muhammad Shah ‘Rangeela’ along with some members of his family. In life, he spent most of his time getting intoxicated, promoting art, music and literature, watching elephants fight and chasing courtesans but in death he rests in peace at last – as very few visitors to the Dargah complex enter his enclosure. His reign is most infamously remembered for the attack and massacre by warlord Nadir Shah who drained the Mughal Empire of all its wealth, including the mountain of light that was the koh-i-noor and murdered between 20 to 30 thousand residents of Shahjahanabad.

Next to Rangeela’s grave is another enclosure, that of Jahanara Begum – Shah Jahan’s daughter and among the most powerful women in the three centuries of Mughal rule. Behind Rangeela’s enclosure lies the tomb of Amir Khusrow, Nizamuddin’s favorite disciple, and one of the key figures in terms of contribution to the Hindwi/Hindustani languages. Many of his compositions continue to be sung all over the world, nearly 700 years after his passing.

A little outside the main Dargah complex is another set of tombs, including that of the father-son duo of Atgah Khan and Mirza Aziz Koka. Atgah Khan was the husband of Jiji Anga, Akbar’s wet nurse while Mirza Aziz Koka was their son and among Akbar’s closest confidantes. The father has a large tomb along with a wall-mosque on its side, while the son built a very unique tomb for himself – a sixty-four pillared structure known as Chausath Khamba.

A number of smaller graves are also located behind this sixty-four pillared building – but most importantly, there’s another small enclosure which houses the grave of one Mirza Asadullah Beg Khan, popularly known by his pen-name ‘Ghalib’.

Across the street from the Dargah complex is the towering structure of Humayun’s Tomb, where Humayun and some of his key Empresses, as well as at least four other Mughal Emperors lie buried in various graves – Jahandar Shah is buried there along with Farrukhsiyar who plotted his death. Also buried in the same complex is Ahmed Shah Bahadur, who faced several rebellions and ended up locked in the Salimgarh Fort for the last two decades of his life by Alamgir II, who is also buried in the same structure. Ahmad Shah Bahadur’s trusted general Muqim Ali Khan ‘Safdar Jung’ is also buried in a nearby monument, which is remembered as the last grand Mughal tomb.

The central hall of Humayun’s tomb has only one grave (Humayun’s) while the entire complex houses over a hundred graves of various members of the Mughal Royal family. Interestingly, there’s one Barber’s Tomb in the same complex which (in local lore) is believed to be the tomb of a Mughal barber. Another significant tomb here is that of Isa Khan, a noble in the Sur dynasty courts. Lastly, the Humayun’s tomb complex also houses the grave of Dara Shikoh which has been left unmarked and unplotted among hundreds of similar graves – just another way of humiliating him post his death by Aurangzeb, who had him murdered to become the Emperor after his father’s detention in the Agra Fort. A controversy has recently erupted over the identification of his grave.

Coming back to the grave of Muhammad Shah Rangeela in the Nizamuddin Dargah complex for one last time, right across his grave is the enclosure that houses the grave of Mirza Jahangir, son of Emperor Akbar Shah II. While his father wished for the younger Mirza Jahangir to become the King, the British were firmly in control of the Red Fort administration by that time and insisted on his eldest son becoming the King as per primogeniture.  Mirza Jahangir, however, is remembered for another reason – the young Prince was detained in the Allahabad Fort by the British after he shot at (but missed) the British Resident Archibald Seton in Delhi’s Red Fort. His mother then vowed that when his son returns, she would offer a chadar to the Dargah of Khwaja Qutb ud Din Bakhtiyar Kaki at  Mehrauli. When he returned, the Queen took a procession from the Red Fort to the Dargah and offered a chadar to the shrine of the Sufi Saint. The emperor also sent a Pankha (fan) to the nearby Yogmaya Temple. This practice continues to be followed till today known as the Phoolwaalon ki Sair. Coming back to Mirza Jahangir, while he never became the Emperor, it was his younger brother Abu Zafar who took to the throne as the ill-fated ‘Last Mughal’, Bahadur Shah II ‘Zafar’.

Zafar didn’t really have many ambitions in his old age. However, one of his wishes was to be buried in the city he loved and among his ancestors. Zafar had reserved a spot for his burial in an enclosure next to the Dargah of Khwaja Qutb ud Din Bakhtiyar Kaki. In this enclosure rest the graves of his father and grandfather (Akbar Shah II and Shah Alam II), as well as Bahadur Shah I. However, this continues to remain an empty spot amid other graves as Zafar was deported to Rangoon, where he spent his final days before being buried there in an unmarked grave (which was later discovered and converted into a Dargah by locals).

This pain of not being able to get buried in his beloved city comes out in his lines where he says:

(how unfortunate is Zafar when it comes to his own burial.
He couldn’t even get 6 feet of land near the street of his beloved)

Zafar’s reign comes to an end in 1857 – and it is around this time that a number of English graves begin to appear in the city. The area just beyond Kashmere Gate and towards the Northern Ridge are where a majority of British memorials and graves have come up. Some of the most iconic of these graves can be seen in the St. James’ Church’s compound, where many members of the Skinner family are buried. Among some of the most prominent graves here are the graves of the ‘White Mughals’ –  Colonel James Skinner and William Fraser, both of whom were prominent members of the British administration in India but had adapted to the Indian lifestyle and culture and dressed and behaved like the Indian royals.

Another important grave here is that of Sir Thomas Metcalfe, the British agent in Zafar’s court and among the most prominent British Delhiwallas. Interestingly, Metcalfe built two buildings in Delhi named ‘Metcalfe House’. The first of the two now houses the DRDO HQ but the second one was actually a Mughal tomb that had been converted into a residence by adding walls around it to make more rooms. This was the tomb of Quli Khan, another of Akbar’s milk-brothers. The cenotaph was removed and a dining table was placed on the same spot!

While Quli Khan’s tomb is located in the Mehrauli Archaeological Park (the same area where a number of other tombs and graves are located, along with the Tomb of Emperor Balban of the Mamluk dynasty), it is the Qutub Complex next to it which grabs all the tourist attention while the Archaeological Park is visited only by a select few. The Qutub Complex houses two major graves – that of Alauddin Khilji, and another of Iltutmish. While Khilji’s tomb has faced the battering of the years and has perhaps been raided and desecrated so as only a stone slab now remains there, the tomb of Iltutmish stands there in all its splendor – but with the open skies where a dome should be, giving it a unique look.

Also in the city are various other tombs of people no longer remembered by their names but simply as ‘Kale Khan’, ‘Bhure Khan’, ‘Bade Khan’ and ‘Chote Khan’ in the modern-day South Extension area. Next to these tombs is the grave of Darya Khan Lohani, a Lodi general who lies in a grave on a raised platform but without a mausoleum around it. Mubarak Shah Saiyyed, a ruler of the Saiyyed dynasty also lies buried nearby but his mausoleum is now known as ‘Dargah of Peer Baba’ where people of all faiths visit to seek his blessings from time to time. Talking Ghiasuddin Tuhglaq who established the Tughlaq rule in Delhi lies buried in a tomb next to the Tughlaqabad Fort complex in South East Delhi.

Interestingly, there’s another monument dedicated to a barber near to the Tughlaqabad Fort, the ‘Nai ka Kot’ – Kings in Delhi really loved their barbers!

One thought on “City of the Dead: Iconic Graves of Delhi”